The F700 counters many different types of drones — from small quadcopters to larger, much faster fixed-wing aircraft.

Thanks to a modern, open API, the F700 integrates with several of today’s leading C2 systems, including FAAD C2.

The F700 launches in seconds and can be completely reloaded for back-to-back sorties in less than 3 minutes.

Utilizing its onboard TrueView® R20 radar, the F700 detects, tracks, and locks onto its target with conviction.

DroneHunter® interceptors are always ready to defend the skies, even at night and in spite of rain, snow, or fog.

The F700 can be outfitted with various countermeasures, more of which are constantly being developed. The latest is the DrogueNet™, a device that disables large Group-2 drones.

Advanced AI drives the F700 to victory against drones that a human pilot couldn’t possibly predict. A “human on the loop” can take manual control at any time with the push of a button.

With more than 4,500 drone captures, the DroneHunter® F700 is a counter-UAS weapon with real field success. Fully autonomous, radar-guided, and purpose-built for superior speed and agility, it stops rogue drones day and night without resulting in costly collateral damage.

DroneHunter® UAVs can act alone or in cooperation with multiple units to protect large restricted areas. The F700 is a highly versatile platform that can be outfitted with various payloads and countermeasures. It capably mitigates both Group-1 and large Group-2 drones. 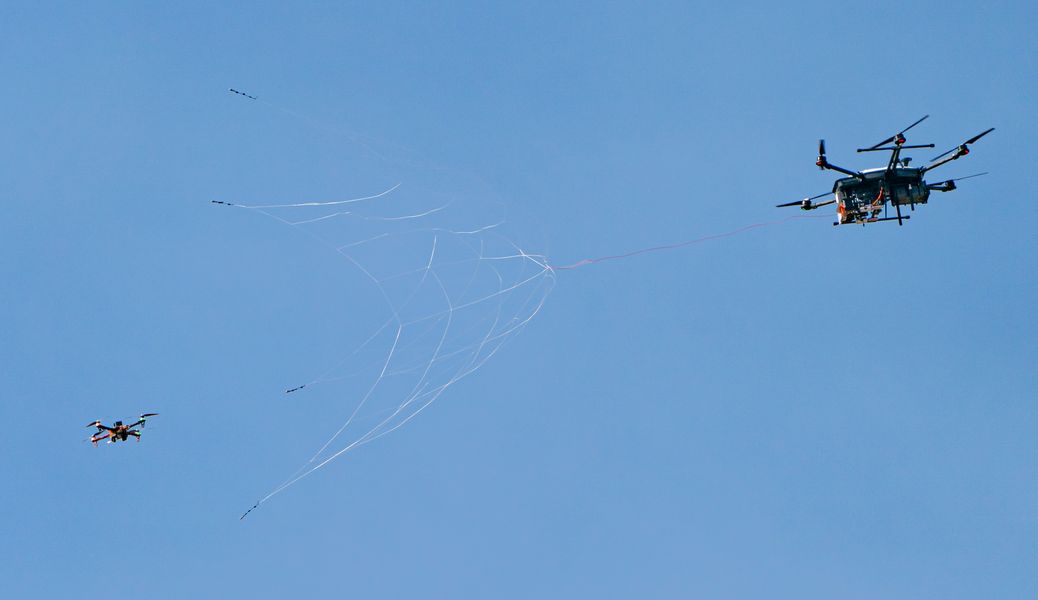 Takes down drones big and small

The F700 is effective at stopping drones of almost any size, including the large Group-2 drones frequently used by rogue militants and terrorist groups. This is made possible by NetGuns™, modular attachments that fire rapidly expanding nets to ensnare targets.

Three types of NetGun™ are available. Small, store-bought drones — otherwise known as Group-1 drones — are best handled by the small or medium tether net. These NetGun™ variants trap the offending drone in a net connected to the F700 by a tether, which is then used to carry the drone to a safe location. The other option, called the DrogueNet™, is used to tackle larger, heavier drones. It fires a large net connected to a drogue, or parachute. This forces the target into a slow and predictable landing, allowing ample time to evacuate the zone below.

Both quad-copters and fast, fixed-wing drones are equally susceptible to NetGun™ projectiles. Once the F700 is within range of the target, escape is highly improbable. Statistically, only 15% of target drones evade the first shot... and a second shot is usually ready to follow.

The F700 isn't the only kinetic mitigator on the market. But it is completely one-of-a-kind. Whereas other interceptors are based on commercially available, general-purpose airframes, the F700 was designed from the ground up for counter-UAS missions.

It is faster and more agile than drones of the same class, able to chase down and subdue a wide range of high-performing foes. Its battery has the capacity for the F700 to engage targets at long distances. And its deep integration with the TrueView® R20, a cutting-edge radar developed alongside it, makes the F700 the smartest and most spatially-aware interceptor anywhere near its price. 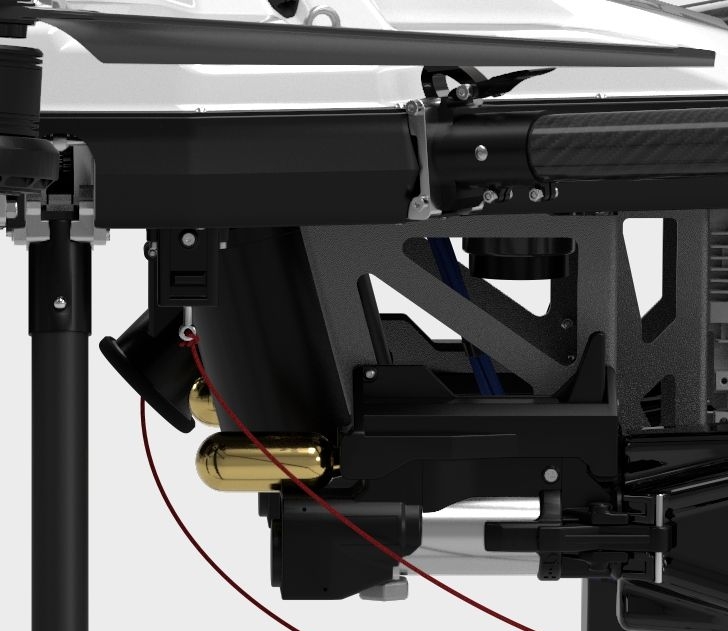 DroneHunter vs. Other Mitigation Methods

Why a drone interceptor?

There are other options to stop drones, such as jamming. Jamming is good for stopping a 12-year-old from taking a picture of fireworks or a careless operator in a parking lot outside a stadium. Most terrorist or near-peer drones intent on doing damage or real criminal activity use off-the-shelf commercial drones that are not susceptible to jamming. They use drones configured to fly on GPS waypoints. They are only listening to GPS and not emitting any RF signal. They are not detected by RF listening antennas because they are not emitting any RF signal. Jamming or hacking with a library of commands is a no-op as there is no RF signal to hack or jam. 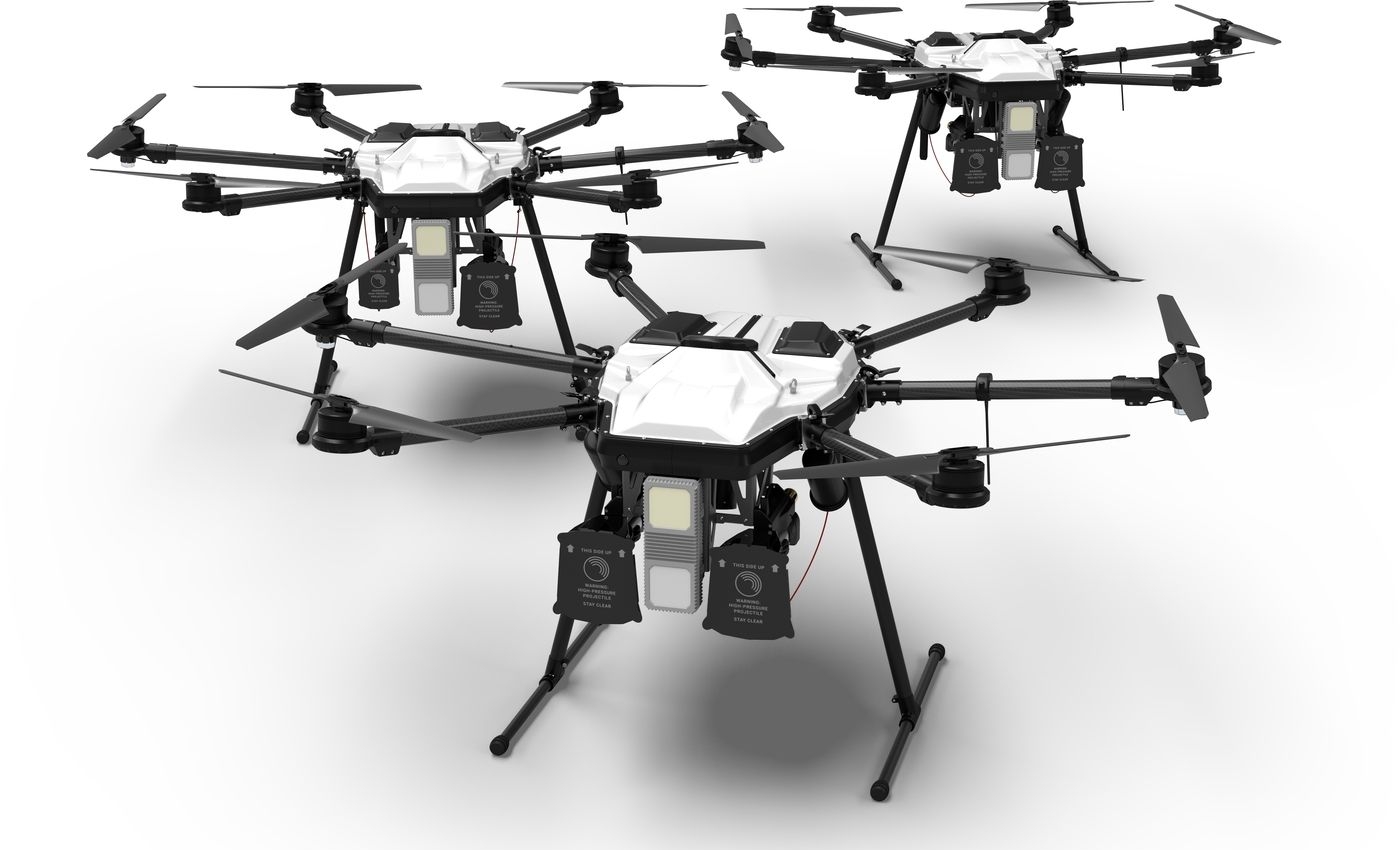 GPS Spoofing is often tried, but easily defeated with counter measures, esp. from state actors. Also, the limited range of GPS spoofing does not often veer the enemy drone too far off its destination.

Directed energy, missiles, high powered lasers, EMPs are often reserved for the battlefield or interdiction far outside the city boundaries. These create high level of collateral damage to use within a crowded city. They are also very, very expensive.

What about a swarm?

Best practices often dictate a large network of DroneHangars and DroneHunters deployed across venues, campuses, and cities. These resources are economically feasible to be brought to bear on multiple attackers simultaneously across a city. For multiple attackers, multiple DroneHunters can simultaneously be brought to the fight; like scrambling F-16s or F-35 fighters, each DroneHunter is built to lock on to an individual target and attack each drone. If eliminating collateral damage by using nets is not the priority, then other effectors can be used to take out multiple rogue drones simultaneously by one DroneHunter.

Many professionals believe EMPs might be the best way to stop a swarm although it is unproven and shielding countermeasures are not that difficult--ask any automobile manufacturer. Also, the effectiveness of all electronic counter measures dissipates 1/radius2. As the distance increases, the counter measure is less effective exponentially. The Fortem DroneHunter is not just equipped with nets and drogues but can be equipped with other effectors.

The precision guidance of a Fortem DroneHunter to enter the heart of a swarm, day and night guided by onboard radar, is not done by any other company in the world expect Fortem Technologies. Whatever effector you need, Fortem will deliver it at close range to the swarm and at a safe stand-off distance from your venue, autonomously, quickly, and accurately.

What about High Altitude, Really Fast Drones that Act Like Missiles?

If incoming drones like a Samad-3 flying at 8000m altitude are detected by long range anti-aircraft radar, then a missile is often used to defeat it at high altitude and very long range. These drones act more like missiles than drones. However, antiaircraft missiles are often ineffective. They miss. A simple cue received from the long-range radar by the centralized Operation Center can seamlessly be integrated with Fortem SkyDome Manager C2 software to trigger the appropriate Fortem DroneHunters across the city to be launched. The DroneHunter will autonomously lock onto the terminal attack track of the fast-moving drone (most often at a lower altitude) if the antiaircraft missile was not effective. This is an effective 2nd layer of airspace defense when long range incoming airstrikes are a risk. While the Fortem DroneHunter does not fly at the same high altitudes of larger drones, like the Samad-3, they are effective as the Samad-3 and other large, fixed wing enemies descend.

The speed of a rogue aircraft also makes a difference in an interceptor's ability to stop the incoming aircraft. That speed shortens the time the AI on the interceptor must calculate the trajectory and make the autonomous intercept. High speed targets are almost impossible to stop for interceptors that require humans with FPV or use narrow FOV, short range optical systems to track and intercept. Fortem has nearly perfected over 68 scenarios to optimize against various threat profiles, size, and speed. The systems started with slow targets and are now performing against targets exceeding double those earlier documented speeds.

The Fortem DroneHunter is an effective back up layer to any antiaircraft missile defense systems, many of which are not very effective against these types of fast, low flying drones.

The most common attacks are single drone attacks and muti-vector attacks with a few drones coming from various directions. Multiple DroneHangars deployed around a venue or across a city, will support the right number of DroneHunters to launch autonomously or via centralized permission from an Operations Center. Each DroneHunter will lock onto a specific rogue drone track. Multiple DroneHunters can be coordinated by SkyDome Manager C2 (integrated with existing C2 systems) when there are multiple threats present.

Several different modes can be selected autonomously by each DroneHunter or the human-on-the-loop depending on the nature of the rogue drone:

When the DroneHunter locks onto a track, the onboard radar can quickly determine if the target is smaller and/or slower than the DroneHunter. In this case, the AI in the DroneHunter assumes an attack position to hunt and capture the offending drone and tow it away via a tether to a pre-determined safe location.

This is normally done at a long stand-off distance from the venue given the long-range mitigation capability of the DroneHunter, often 3x-10x the distance of other ground-based mitigation techniques.

When the DroneHunter locks onto a track, the onboard radar can quickly determine if the target is larger and/or faster than the DroneHunter. In this case, the AI in the DroneHunter autonomously assumes a defensive stance between the incoming rogue drone's track and a pre-defined defense point.

As these fast-incoming drones and fixed wing aircraft arrive flying on waypoints, the DroneHunter maneuvers to fire a net with specialized entanglers to attach to the wing or fuselage. As the rogue aircraft is entangled, DroneHunter attempts to tow it away, but if too large, the drag on the tether releases with a parachute at the end of the tether. This parachute causes uneven drag on the aircraft, causing the rogue aircraft to a near stop and float safely straight to the ground.

Use this form to open dialogue with us. You'll be contacted by a real specialist, operating in the United States, who can discuss your specific needs at length. Please allow 5-7 business days for the right person to get in touch with you.