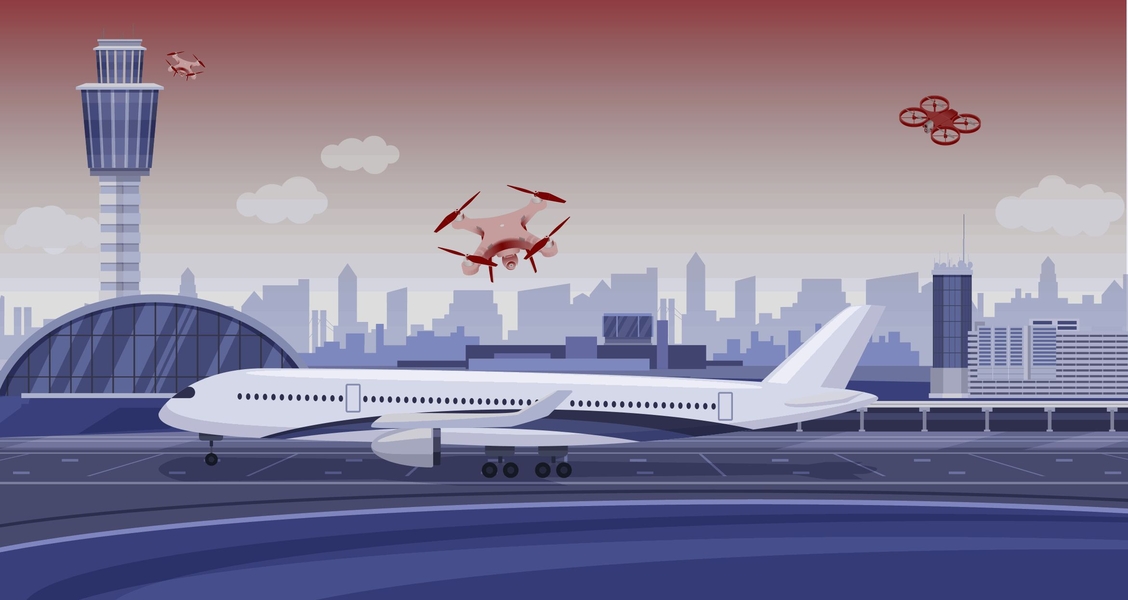 In recent news, drone security has been a highly-discussed topic due to costly airport disturbances from Gatwick and Heathrow Airports in London to the Newark Airport in New Jersey. Drones disrupting airport traffic has been international news and has been written about, televised and posted from The New York Times, Forbes, Reuters, and many other credible organizations.

To many people drones can be seen as just a recreational toy, but to governments, law enforcements and other security personnel drones can be tools for deliberate mischief, dangerous pranks or even deadly terrorism.

The recent airport drone incidents have caused delays and shutdowns. These drones are entering controlled airspace without prior authorization. Safety is paramount at airports, so the presence of these drones in unauthorized airspace requires the shutdown of all passenger air traffic, costing airports and airlines millions. Airports are not only responsible for the airspace above their fenceline but for keeping the airpace “all-clear” up to five miles outside the airport in the landing and take off paths of all aircraft using airport facilities.

The Federal Aviation Association in the United States has registered all airports as a no-fly zone, unless authorized. While the FAA is seeking to enforce these rules there are drone operators not complying. These operators are either unaware of the no-fly rules or are willfully ignoring them. Drone operators can be classified into several categories; compliant, careless, clueless, criminal or terrorist. It has become apparent due to recent drone incidents at airports that creating no-fly zones regulations is not enough to resolve the problem.

In the Gatwick Airport drone incident, eye witnesses and authorities are suggesting that multiple drones disturbed the airspace which caused the airport to shutdown for a day and a half (36 hours). It was a game of cat and mouse with the police and military attempting to locate and take down the drone and find the operator/s. Various tools were used to try to locate the user and/or to disable the drone.

Over the course of the event, the British Police deployed several countermeasures to find the drones, their operators and to resolve the situation:

Both the land and the air units had permission to employ hard kill methods (sniper rifles and shotguns) if they were able to find the drone(s). This of course would have presented a safety concern from the guns failing to hit the targets or from the falling drones if they were successfully hit.

All proved to be ineffective in tracking the drones or finding the operator.

The British Army brought in their own countermeasures to assist in the drone mitigation. They employed another RF drone detection mitigation system built in Israel - “Drone Dome.” This system was built to track and jam the radio frequency that the pilot and drone were using. But the system was unsuccessful in finding or defeating the drones. Why did both of these systems fail?

There are only two possible reasons:

In either case, the systems left unanswered questions about whether the drones were actually there, or if the system could not detect them. Both of these answers are unsatisfactory. In order to alleviate this type of threat in the future and to shorten the length of time the airport is shut down, the detection and mitigation system must be able to answer the questions definitively.

The FAA in the US implemented a new public law and security act in 2016 requiring airports to receive proper authorization before using any form of drone detection and counter-drone technology. This act specifically covers the use of radio frequency jammers, GPS jammers or any device that emits electromagnetic frequencies. These devices might disrupt communications between the air traffic control and nearby manned aircrafts, communications among ground and security personnel and the cell phone signals of passengers and those providing life saving services.

Could there be a better way to take control when an event like this happens?

There are several pieces of technology that are designed to find, track, categorize and assess the threat of drones flying in unauthorized airspace without interrupting critical airport operations and the convenience of customers.

Fortem is the leader in airspace safety and security. With their proprietary, AI-enabled radars and SkyDome software, they provide real-time intrusion detection of all objects in an airspace. This includes drones that are not emitting any RF signal. Fortem is a provider of military tested, commercially available solutions that alert, identify and secure against drones and other threatening objects in the sky.

This is done by leveraging SkyDome and Trueview Radar as the foundational key components of a multi-layered defense strategy and DroneHunter as a safe drone mitigation solution.

The Fortem SkyDome is a comprehensive platform for airspace awareness and security that provides customers with the essential elements of airspace management. Combined with Fortem’s TrueView radar it sees everything in the airspace, including hundreds of objects simultaneously and determines the level of threat they are to aircraft, airports and the customers they service.

The Fortem DroneHunter is a military-hardened drone equipped with TrueView radar that enables autonomous flight for pursuit, surveillance and interception of threatening drones. The DroneHunter can capture a rogue drone mid-flight towing it away to a safe location.

This system will provide the best solution for surveillance and protection against drone-based attacks. Fortem Technologies will be able to detect, alleviate and keep the airspace safe and stop disruptions from unauthorized intruders.

Fortem Technologies can mitigate disruptions, espionage, and acts of terrorism caused by drones as a layer of defense that other systems do not offer and help save airports and airlines millions of dollars. 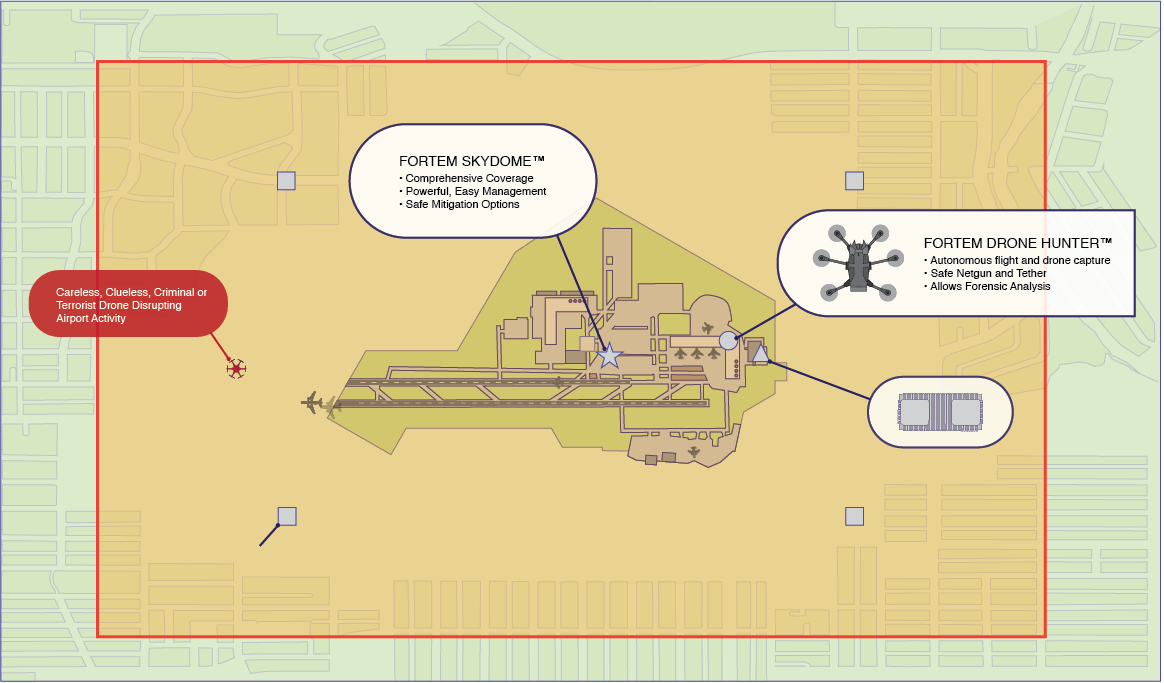