The US Department of Defense may have a novel solution for intercepting rogue drones that fly too close to its bases.

According to a report from Defense One, the Pentagon has signed a contract with Fortem Technologies to use its brand of 'Drone Hunter' to nab unmanned aerial vehicle in midair.

The drones reportedly use a mixture of AI and radar to track their targets in the sky and then swoop in near enough to shoot out a net attached to a rope that wraps it up mid-flight.

Pentagon wants to use an AI drone that hunts rouge UAVs

While bases are allowed to use more forceful means of neutralizing enemy drones - namely shooting them out of the sky - one of the major advantages of using a Drone Hunter is that it lowers the risk of dangerous debris that might hurt bystanders in urban areas.

'Drone attacks on the nation's men and women in uniform are increasing. Fortem has a number of technologies that can help protect military bases without adverse effects to local communities,' wrote the DoD in a statement announcing its contract.

In addition to the Drone Hunter, the Pentagon will also use several other systems made by Fortem Technologies, including its TrueView radar which it calls 'the world’s smallest, most accurate, cost efficient, distributable radar of its kind.'

Additionally the Pentagon will test SkyDome, which monitors an environment for incoming drones and helps tell the difference between a drone and other flying objects.

While this is the first time that the US military will use such a system, similar drones have also found their way into the hands of other foreign government, including the Chinese military.

In footage released last year by the country's state broadcaster a similar drone was shown capturing another small remote-control aircraft during a test. 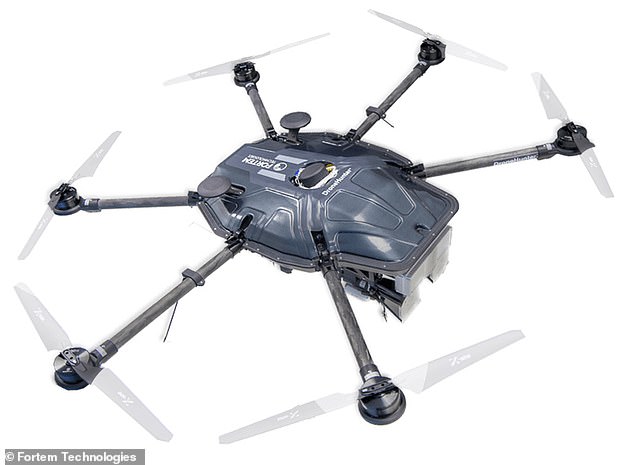 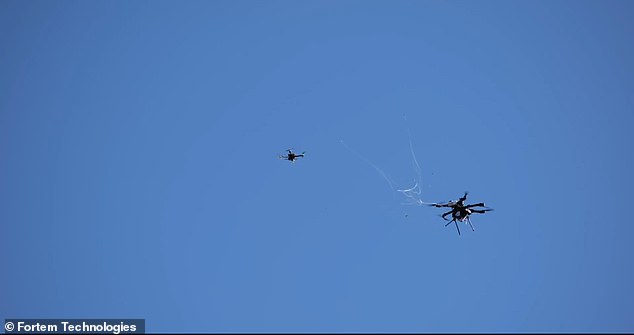 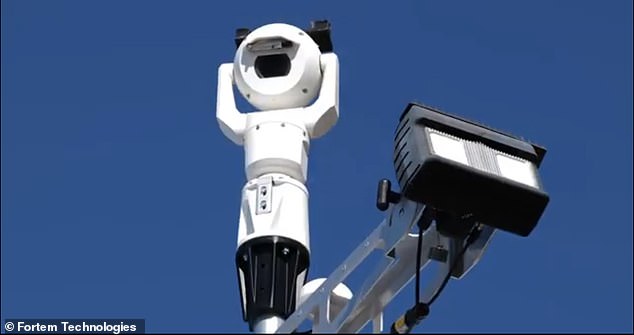 Fortem also sells other technologies that augment the ability of Drone Hunter, including tracking system that can discern between a drone and other flying objects

A camera is installed under the drone to help it locate targets. Two launching cylinders are attached to the monitor, ready to cast the net.

According to China Central Television Station, the drone can automatically identify other unauthorized drones in airspace and carry out interception missions.

Other systems for downing drones used elsewhere in the world include high-energy lasers and other more advanced radar techniques for identifying the flying vehicles.

Fortem Technologies is the leader in airspace awareness, security, and defense for detecting and defeating dangerous drones. Through an advanced, end to end system of distributed radar, AI at the Edge, deep sensor integration, and autonomous drone capture, Fortem monitors and defends the world’s venues, infrastructures, cities, and regions. The same system is accelerating the safety of the world’s airspace for urban air mobility. Based in Pleasant Grove, Utah, the company is privately held and backed by Boeing, DCVC, Mubadala Investment Company, Signia Venture Partners and others.